The term Mace (from the Latic Massa) meaning a lump or mass, properly pertains to the Military Mace which was derived from a simple club.

Originally, Maces were the peculiar weapons of the King’s Sergeants-at-Arts as early as the fourteenth century.  The Mayor, after having taken his seat in the Council Chambers the Mace is then laid lengthwise on the table in front of him at Public Council Meetings, and when he leaves his seat the Mace is either taken away or covered up.  No one but the Mayor has any right to it.

The City of Corner Brook Mayor wears the Chain of Office during the inauguration ceremony and to greet special guests and dignitaries.  On semi-official occasions the Mayor instead of wearing the Silver-gift Chain wears only the Badge suspended from a silk ribbon collar. 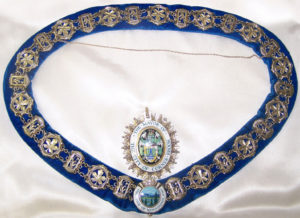