In February of 2021, the City of Corner Brook launched a survey to examine the impact of its ATV Road-Access program for residents and businesses in 2019 and 2020. The purpose of the survey was to measure positive and negative impacts of the program for residents and businesses, which can further define its direction for 2021. The survey also targeted visitors to gauge their reactions to being allowed on City streets with the side-by-sides. We thank residents, visitors and of course business owners for their input.

Acting on the findings: On April 12, 2021 a notice of motion to council was presented to Council recommending the following changes to the Recreational Vehicle Regulation 2019 (amended copy linked) that will include:

Other program enhancements will include:

The survey was hosted on the City of Corner Brook website and advertised multiple times during the month and a half it was active. It was covered by multiple local media outlets throughout this time. We had 487 total respondents.

Some common themes stood out:
– Of the positive responses, many felt access should increase to more roads and areas. They highlighted the impact on local businesses, saying the ability to shop at local service stations and grocery stores, as well as stay at local hotels, was a reason to come and stay. This was echoed by business owners and visitors alike, with very little negative feedback. For residents, the ability to access trails without having to load their vehicles on a trailer was an improvement to their active lifestyles.

– Of the negative reactions, most felt that the program could use better enforcement measures to mitigate unlawful or nuisance riders. While a few disparaged the program and said it should stop, most said they would support the program with improvements to regulation and enforcement. 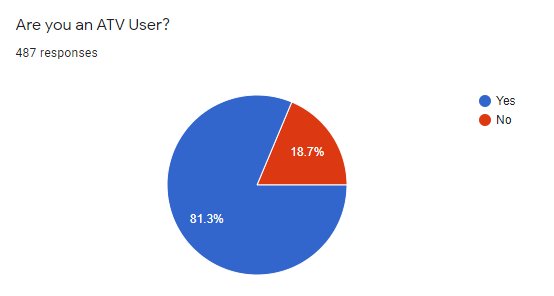 Of the 80 (16.4%) who classified themselves as visitors, 23 are from outside the province.

Visitors from outside the province say the access makes cross-island travel much easier. For example, this response: “Forward thinking, allowing tourists like me access to your wonderful businesses. In the past there was a lot of anxiety trying to stay near Corner Brook and then doing the snowmobile trail bypass which was barely passable by ATV, very muddy and time consuming. I have been crossing the island since 2015 and currently have reservations for Sept 2021 to stay in Corner Brook at the Greenwood thanks to your user friendly laws. Well done!”

Of these 34 (6.9%) of the respondents who are business owners, 6 have said the ATV program negatively affected their business.

We had 28 text responses from business owners about the impacts on their business.

Two of these are negative: ”Customers complained about ATVs on the road , not following rules.” And “Tourists and locals have said that they don’t like the ATV activity around town and around my business. Most are appalled that Corner Brook is promoting this activity. It isn’t progressive.”

The positive responses from business owners include but are not limited to:
– “I own an automotive repair shop on Maple Valley but was able to help ATV users with minor repairs so they could continue their journey. Small amount of revenue but this just started. More importantly, opportunity to meet other people from other communities, cities or provinces.”
– “Easier trail access. Our ATV rental & tour guests can now leave from our front door – no trailering needed.”
– “Purchased gas, convince store items. Mill Road Circle K”
– “Increased Sales”
– “Brought more customers in during non-peak days and hours.”

Increased access for repairs was addressed more than once. There were some business owners who said it didn’t impact them either way.

84 (17.2%) of respondents said the program affected them negatively. 9 cited noise, 19 identified speeding ATVs, 19 said illegal use of dirtbikes, and 37 selected “other”.

The “other” respondents refer to common themes. These concerns are shared among some text responses from those who identify themselves as ATV-positive and supportive of the program. They include:
– ATVs not following the rules of the road.
– A lack of enforcement.
– Noise outside of the designated times.
– No signal light requirements on ATVs.

Some positive feedback includes:
– “I can use it more. My 85 year old mother in law road for the first time last year because we could leave right from her house”
– “Access to gas stations.”
– “Better access to Fuel , grocery stores, and dry goods used when traveling to my cabin, hunting and for recreation.”
– “The program is great for the city it brings people into city and in return brings business.”
– “I think it’s wonderful. Was worried at first that there would be people taking advantage in a bad way, but was pleasantly surprised to see how smooth the integration was!”
– “I work at a atv dealer we had a few traveling across the island that had troubles with their atv. made it much easier for those people”

Opening more of the City

Not everyone responded to the opening of different parts of town, but the feedback was overwhelmingly positive for all regions with each hovering around 89%, except for townsite: 85% (370 out of 432 responses).

While the City of Corner Brook does not control Provincial highways, we asked participants about their thoughts on access to Hughes’ Brook. During the 2020 season we received a lot of requests asking for access to be granted. With the numbers provided by this survey we will continue a dialogue with The Province to see what options are available for trail access via this route.

Once again we would like to thank you for your participation in this survey, and we look forward to further feedback on the proposed amendments. Once the notice of motion is before council, Mr. Flynn will be available for feedback at tflynn@cornerbrook.com or via phone at 709-637-1570 until Thursday April 21, 2021.

There are no upcoming events at this time.